By now, anyone who knows me at all knows that my tiger oak “problem” is legendary. It’s one of my favorite things on earth. Painting it should be illegal and punishable by water torture. I’m not all that sure that I’m kidding when I say that…

I noticed that someone on my “upcycle/DIY” FB group listed a tiger oak dining table (round) that opens for a leaf. It was huge, something like ’56 round! Furthermore, it damn near weighed a ton (seriously). It was way too large to be used in its current state, and I would never part with my Carrara marble kitchen table. It was too beautiful to pass up for $20. I knew I had to find a way to re-purpose it before Jeff got home from work and threatened serving me with divorce papers (again)!

After walking my house and brainstorming with my best friend, I remembered that I’ve always wanted a server/buffet in the dining room, but I don’t have one. A server too big and chunky would take up too much room, as I already have a mahogany Queen Anne set that includes a table with 2 leaves, 6 chairs, a curio, a hutch, and an antique side table.

How to turn this massive table into a server? Cut it in half at the bias, where it breaks apart for the leaf! The edge would sit along the wall under the partition, coming out in a demilune/half-moon shape.

Then came the issue of what the heck could serve as the base. Hubby and I then recalled that in the very back of our storage room was the mahogany, Queen-Anne end table that we used as a coffee table and ate off at for 4.5 years at the apartment. Not only would it match the dining room set, but it also has sentimental value. The fact that the top was all sorts of beat up didn’t matter, since we’d be securing the top to it anyway.

The issue was that the server would sit too low. A trip out to the shed turned up old pieces of pressure-treated 2 x 4. When we stacked them (piecemeal style), the height became perfect. After that came a lot of pre-drilling, broken drillbits, loud noises, very long screws, and the task of securing them to the base. The remaining movement and slight rattling was fixed with shims.

I refused to risk long screws going up into the tiger oak top, because I was unwilling to risk a screw coming through the table top. When something is 100 years old with a perfect patina, it’s never as easy as wood putty, filler, and new stain. Instead, we used liberal amounts of contact adhesive. We put the top into place on the base and weighed it down heavily overnight. It’s now nice and secure!

I love the character of old pieces and wanted to make the server look its best without messing with that. I applied a small bit of stain to chips along the edges, and then made a homemade polish with white vinegar and olive oil, massaging it into the wood. This is literally all that was needed. Here is the end-result. If you like it, we have an extra base and the other half of the table if you’d like to make one. I’ll unload the supplies cheap, just let me know! 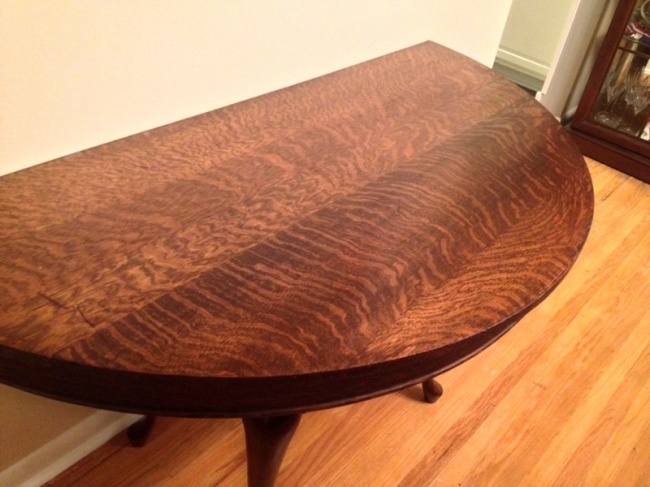 Here are some photos of the dining room, so you can see the lay of the land: 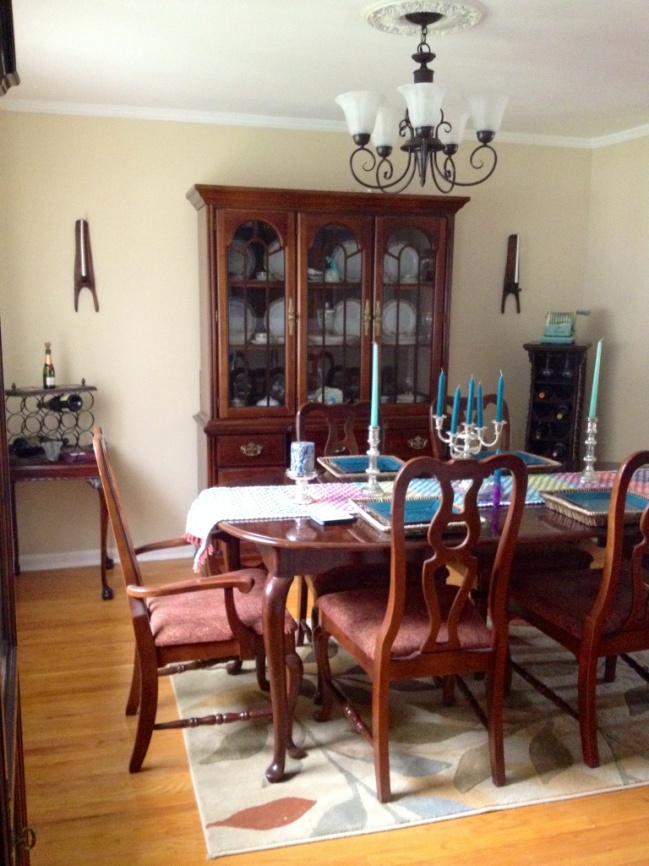 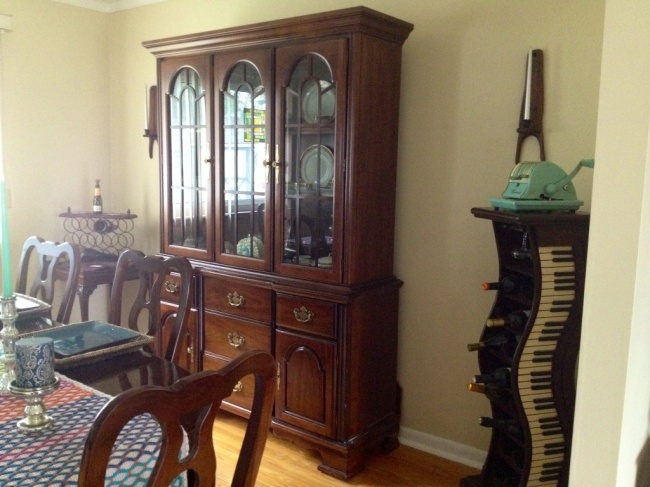 I LOVE this project. It was fast and easy with two people and it was a fun way to re-purpose an antique. I love it, and it will get plenty of us during dinners and parties. Not bad for $20!